Here in SW Ireland it is suddenly Spring and the sun is shining down into all those corners where cobwebs lurk and muddy doggie paw prints adorn the floor ! The rescue cats, Roobarb & Custard are living off a diet of baby rabbits, or sitting below the bird table waiting for one to fall off !  Cooper our labrador has discovered the delights of any muddy puddle he can find and has taken to sitting down in the small pond we pass on our morning walk.  I think he likes the cold water effect on his poorly knee and this week on our way to get Pat out of plaster, we have to take Cooper to the vet first too have his knee replacement !  Nothing like having everything happen at once is there ?!
I have sneakily asked my son Mark to visit us from Germany for 10 days to help cope with Himself and the dog as I foresee lots of lifting coming up, so he flies in tomorrow to Kerry airport from Frankfurt Hahn and Mum here has to go and pick him up.  Also I suggested to Pat that he could probably hoover whilst sitting in the Power Chair and this has proved relatively successful, so much so that he combined it with dusting everything he could reach up to waist level – so we are halfway there !
The nicest thing I have to report is that my Word for iMac code eventually arrived and I achieved its ‘Easy Download’ after lots of swearing and pressing buttons.  I then shut my eyes, put in the pen drive with my book on and did lots of praying ! Much to my relief it downloaded, pictures and all,  so caught up in the Springtime fever I wrote an astonishing letter to a Publisher and posted it off ! We shall see how that transpires.
When I wrote my last book ( in 1989 and pre. RD diagnoses!! ) I had to do lots of TV, radio and other such promotions, including The Late Late Show, so it has slightly caused me to wonder how I would cope with all that and my RD – doesn’t bear thinking about !  Writing a book leads to all kinds of other work, sometimes even paid work !  I can distinctly remember being asked by the World Wildlife Fund to travel to the Shetland Islands to write an article on Otter Conservation, along with journalists from The Times, The Telegraph and several others ! I had to fly to London, then to Aberdeen and thence to the Shetlands in the middle of winter.  Luckily I had taken one of Pat’s survival suits with me so I was the only one properly dressed.  I just recorded the answers to the questions asked by the other journalists, so I managed to scrape by, though we never saw a sign of an otter, except a dead one that they took out of a freezer which was waiting transportation to Aberdeen University and looked nothing like the real thing.  How do I know that ? Well, we have otters in the stream at the bottom of our garden, though I never mentioned that at the time !! Happy Days !
My RD has taken a pounding over the last few weeks and in desperation I went to my GP and asked for help. He has slightly changed my medication (from Cataflam to Arcoxia) and the difference in pain levels is remarkable. I actually feel much less sore, though I am still on the Humira and Methotrexate.  I’m trying to rest for an hour each afternoon, but the advent of Spring has tempted me outside and I’ve now got a sore back from trying to do some weeding! Such is Life and I’m wondering if Mark will remember how to weed after living in Germany for so long – let’s hope so !!

Sally Borst is the author of ‘Self-Deficiency, the Real Truth about Country Life’ which can be found in ABE books. She is married to Pat and they live about 18 miles from Kenmare on the Beara Peninsula in SW Ireland. She has 3 children and 3 grandchildren, a black labrador and a black greyhound.
She has also written for various magazines such as Country Living and Woman's Way. Currently (apart from blogging) she is working on Book No.2 called "Butterfly Summer". 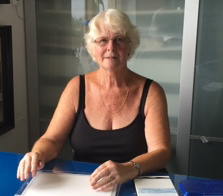